It’s a crying shame so it is!

Every once in a while, as we beaver our way through our regular agenda at our monthly meetings (always the last Monday in the month at the Harry Smith Centre, and we welcome visitors) one or other of our members will toss a wee hand-grenade into the conversation. Nothing wrong with that, that’s exactly what they were elected to do, and if it is important to the Royal Burgh, it is important to our members!

Our August meeting started as usual with a visit from guest speaker Karen McFarlane, who is the Project Co-ordinator for the Rural Energy Academy (No! Me neither, but I know her and it now!). Karen works for South Lanarkshire College (but is based at 2 Hope Street) and her slogan is “Now is Your Time to Connect”. Her role is to enable and guide the long-time unemployed into work via a Digital Skills Course that will teach them everything they need to know when searching for employment in the digital age. (Now who wouldn’t benefit from a dose of that?).

After Karen left us, we got on with the old routine. Our secretary Eleanor (referred to normally as the “Duracell Bunny” because she never stops moving or doing) had already asked on-line for any items under the heading AOCB, and boy, did we get a bucket load!

It wasn’t much of an update – we had fully expected to be inundated by funding requests from our local organisations by this time, and thought it likely that we could perhaps dispense all of the available £5K we had available in one go, but we are (at the time of writing) only in possession of 4  (that is not a misprint) applications, with one more issued, but not as yet returned.

If you read this blog, and have an application in mind, get it filled out and submitted while there is still cash in the kitty. If you don’t read this blog …. Tough!

We then moved on to that are of our Agenda covering “Community Promotion” First up was “Strictly Come Gardening” (the name was the Duracell Bunny’s idea) Presentation to the winners and runners-up will be on Thursday 26th September at 19.30, in – appropriately enough - Castlebank Horticultural Centre.

This was followed by an update on the 2019 Burgess Awards on Tuesday 17th September, commencing 7pm. Six of our community will receive their Burgess Tickets that night in the Memorial Hall from Provost Ian MacAllan. These are Lisa Archibald; Alan Boyd; Janice Coulter; Margaret Frood; Jimmy Gilchrist; and Brian Reilly. Many congratulations to one and all!

We then felt the impact of the first of five items submitted by Leonard Gray, in response to the secretary’s request. Leonard is by far our longest serving Community Councillor, having served continually on the RBLCC since it was just a Steering Group trying to get organised. Leonard has also served diligently as Chair of the RBLCC on two occasions, 1989 – 1992 and 2003 – 2005.

The first was relatively easy to answer; Q: “What is our official position on our lack of any public toilets?” A: “It is disgusting so it is and a health hazard to boot. SLC should be ashamed of their involvement in reducing the Royal Burgh to pre-Victorian standards. At least in those days the citizenry was afforded some relief via the Pudden Burn!” Speaking as a C.C. Member of a certain vintage who, I am acutely aware that when well-known clue arrives signalling that one should consider preparing to ‘go’, one is required to ‘go’ in a hurry! 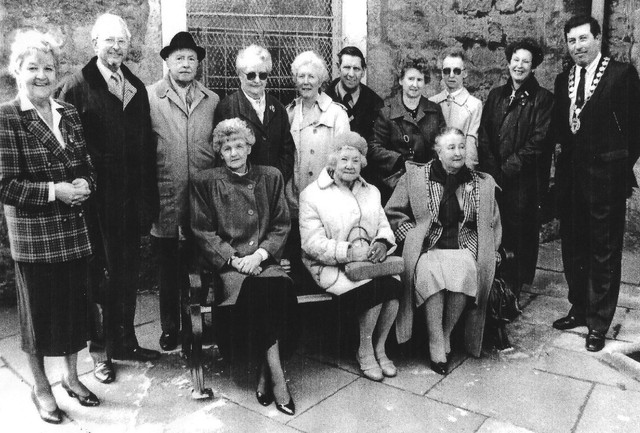 Have a look at the photograph above, kindly provided from Leonard’s archives. Sadly, some of them are no longer with us.

How many of them do you recognise? Excluding the young Leonard with his Chain of Office of course. They are all gathered here with a few seated on the bench which was in fact the reason for their gathering. This was a celebration of a previous RBLCC project by which many citizens were encouraged to ‘donate’ a park bench to be installed somewhere around the town, usually in recognition or memory of some prominent and/or highly regarded member of the community (We didn’t have Burgess Awards in those dark days) A large number of such benches were donated for these purposes but -always a big BUT when the Council are involved – when  the dust had all settled (and that took a while) after the Town Centre had been redesigned by the council circa 2002, most of them had apparently vanished, never to be seen again.

The second Question was: Q: “What has happened to the Memorial Benches donated to the Town as a Community Council Project prior to the Streetscape?”

A: “We’ll let you know if we ever find out. Catherine McClymont is hoovering around Almada Street searching for anybody who knows what a Memorial Bench looks like!”

Why now, I here you ask? It’s been a long time since the Streetscape Project, and nobody seems to have noticed or complained before? Perhaps someone in the picture above knows something about this mystery – (Some of them do look a bit mysterious!).

The Council did install a series of solid stone benches as part of the Streetscape, fair’s fair, but why did they purloin, bin, scrap, or nick the ones so lovingly and generously donated by those above, in memory of a dear friend or relative when they did so?

We had another couple of doozies from Leonard still to consider. “A full discussion on the legitimate ownership of St. Nicholas Church Steeple” – and – “Any progress on the STAG investigation on SLC’s proposal on the Lanark to Edinburgh rail link.”

We didn’t discuss any more that night, by this time most of the members were in a coma and anyway, we were about to be chucked out of the room. (Maybe they had heard what we were discussing?).

A few of us had a blether outside the Harry Smith Centre after we had been evicted. We all agreed that the Community Council had never been so busy before Leonard retired from lecturing at Uni.

Someone suggested that perhaps he was finding the adjustment to becoming a man of leisure difficult and needed the intellectual stimulation he was now apparently missing from his work.

Someone suggested we could invite our guest tonight, Karen McFarlane, to have a word …

Frank Gunning shares his views on various local issues in his Let's Be Frank column.